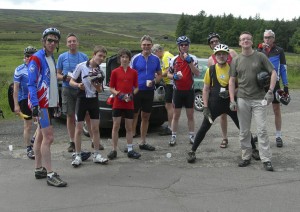 For three consecutive years the ride took place on the quiet lanes around Bradfield and the reservoirs.

In early May 2008 we started on Loxely Common in grey weather with some rain threatening all day. The long course went to Bolsterstone, Midhopestones, Strines and then back to Loxley Common. The short course was a smaller loop around the four reservoirs near Bradfield.

In 2009 the long course was extended with the fearsome climb from Bamford up below Stanage and then back to Loxley through Ringinglow. The short course remained the same. The ride took place in June in decent warm weather.

2010 brought another extension to the loop for the longer course out towards Hope before the big climb back up under Bamford Edge and Stanage. 50 miles and 1693m of climbing! The short course was the same smaller circuit around the four reservoirs near Bradfield dubbed ‘Reservoir Cogs’.